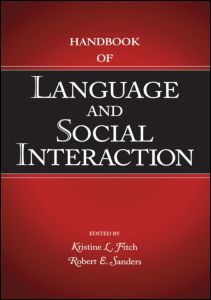 Handbook Of Language And Social Interaction

Wittgenstein’s ideas about language use in his later writings (e.g., 1951 /1958) have often been interpreted as laying the theoretical foundations for a view of language as a form of action embedded in context, a view fundamental to pragmatic theory. The notion of language as a form of action is clearly echoed in speech act theory; its modes of embeddedness in context, on the other hand, remain problematic in many ways. The link between these two aspects is suggested by Wittgenstein’s notion of language games. “Here the term ‘language games’ is meant to bring into prominence the fact that the speaking of language is part of an activity, or a form of life” (Wittgenstein, 1958, p. 11). Tellingly, the list of language games proposed by Wittgenstein in Philosophical Investigations includes speech acts performable in single utterances, like giving orders (but also obeying them), asking, thanking, cursing, greeting, and praying, as well as language uses requiring extended discourse, such as describing objects, reporting an event, and making up a story. Other uses mentioned, such as playacting, guessing riddles, making a joke, and translating seem to fall outside the scope of a speech act type functional classification of language use. As noted by Levinson (1979, p. 366) “there is more implied in Wittgenstein’s language games analogy than can be captured in a theory of speech acts.” Furthermore, Levinson’s claims from the late seventies are still true, namely, that Wittgenstein’s intuitions about the embeddedness of language in context, of language being always part of an activity, have not been fully accounted for in any modern theory of language use. The problem of language games, as I see it, is how to account for the ways in which language operates in established ways to achieve given functions and how such established ways can be dynamically shifted and reshifted in actual use for the same and different functions. In other words, the issue is whether there is any systematicity in the ways text and context interact in the negotiation of meaning.