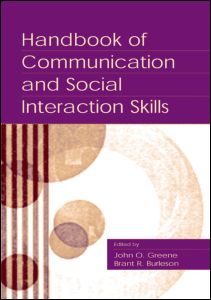 A Review and Discussion of Emerging Perspectives

This chapter presents a review and critique of empirical research on communication skills in marriage or married-like relationships. Such a chapter is warranted on several counts. First, marriage remains a popular social institution with about 80% of the population professing an intention to marry at some point in their lives (McDonald, 1995). Although most couple relationships start out happy, satisfaction erodes for a substantial proportion of marriages. At any given time, 20% of all married couples report marital dissatisfaction (Reynolds, Rizzo, Gallagher, & Speedy, 1979), and in Western countries, between 40% and 55%of marriages end in divorce (De Guilbert-Lantoine & Monnier, 1992; McDonald, 1995). Second, marital communication is a more valued resource for married individuals than communication with others; among married people, the spouse is the person most often turned to for support (Beach, Martin, Blum,&Roman, 1993; Cutrona, 1996; Sarason, Sarason,&Pierce, 1994). Third, escalation of conflict into violence is common in married couples; physical aggression occurs in about 30% of married couples in the United States (Straus, Gelles, & Steinmetz, 1980) and newlywed couples in the United Kingdom (Kelly & Fincham, 1999), leads to significant physical injury in about 10% of couples (Straus & Gelles, 1986; Straus et al., 1980), and is the most common interpersonal context in which homicide occurs (National Committee on Violence, 1990). Fourth, marital conflict is associated with child problems, particularly when children are exposed to unresolved conflict and frequent, intense physical aggression, and remains unresolved (Cummings & Davies, 1994; Fantuzzo, et al., 1991; Grych & Fincham, 1990, 1992). Finally, conflictual couple communication is associated with stress-related disease indicators, such as poor immune response (Kiecolt-Glaser et al., 1987) and sustained elevations in stress-related hormones (Malarkey, Kiecolt-Glaser, Pearl, & Glaser, 1994).