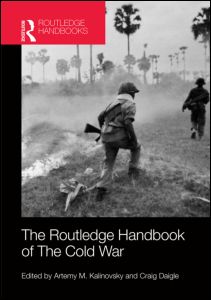 Technology and the Cold War

The Routledge Handbook of the Cold War

Rockets, reactors, missiles, submarines, fighter jets: For decades, the Cold War conjured images of an imminent military confrontation and the terrifying prospect of nuclear weapons deployment. The arms race between the United States and the Soviet Union was intense, its impact profound. With the introduction of high-tech nuclear weapons, vast military industries developed in both countries. The result could have been mass destruction on an unprecedented scale. Much attention has been paid to this aspect of the Cold War conflict – and rightly so. But the intense focus on military topics and high-level political actors in Moscow and Washington often overlooked other kinds of technologies and exchange processes. In addition to struggles over fighter-bombers and warheads, in fact, the technological competition between East and West also extended to consumer desires and living standards. Reviewing a number of more recent contributions on this subject, this chapter looks at the connections between Cold War politics, technological innovation, and material demands. This, too, was a complicated affair involving state bureaucrats and communist parties, information agencies and espionage, ambitious planners, engineers, designers, advertisers, itinerant experts dispensing advice, and propagandists of all colors. At its most conspicuous, this was a race between capitalism and socialism over consumption: everyday conveniences like televisions, washing machines, and modern kitchens. But underlying this race in mundane consumer artifacts were aspirations for a better life, shared by millions across the world, and the pursuit of international prestige and modernization.

The Cold War in the Middle ...

The Cold War in Africa

The Cold War in Latin Ameri...