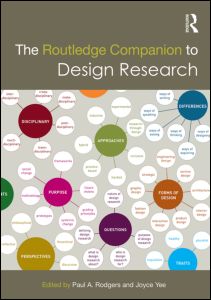 The Routledge Companion to Design Research

The field of design research is a marketplace of methodological 1 diversity. It isn’t just that there are many different research methods in the field, but that there are many different methodological ‘foundations’ – principles for how research can and should be done, for how contributions to knowledge ought to be pursued. This is not particularly surprising given how broadly ‘design’ is often conceptualised. Herbert Simon (1996) suggested “the proper study of mankind is the science of design” (p.138); Nigel Cross has identified a principal difference between humankind and the animal kingdom to be our ability to design. In light of such encompassing notions of design it is difficult to imagine how the field of design research should exhibit any less diversity than that found within and among the arts, humanities, the human and the social sciences. A cursory survey of design research can easily identify rich traditions of design inquiry along each of these different lines. For example, some strands of design research are conducted as design history; Boyd Davis’ (2012) exposition of the evolution of the timeline as an artefact of graphic design is a recent example. Design research is also pursued in the form of design critique, where various extant artefacts are analysed to identify salient aspects of their form, function, interactivity and the like. Bardzell et al. (2010) give an example of a form of design criticism applied to the design of interactive systems. Research in design is also conducted through experiments, of the kind that have been developed in psychology, where test subjects are asked to perform certain tasks under various experimental constraints as a means of empirically testing hypotheses. For instance, interested in whether ‘novel’ designs are more aesthetically pleasing than ‘typical’ ones, Hekkert et al. (2003) devised experiments to explore the relationship between the perceived originality and/or conventionality of the industrial design of artefacts against perceptions of their aesthetics. Other research takes a more naturalistic approach informed by ethnographic sociological or anthropological methods, in order to study e.g. how practising designers accommodate ambiguity and disagreement in interaction (McDonnell 2012), or the ad hoc criteria they rely on in making practical decisions (Lloyd and Busby 2001). A growing proportion of design research is conducted in a manner in which designing is a component of the research method. The subfield of participatory design is a visible body of work that has been undertaken (primarily) through the engagement of the researchers themselves in collaborative design events and activities, often in the mould of action research (e.g. Bødker and Buur 2002). Some design research has no empirical component, relying instead on conceptual arguments, analogies and forms of logical reasoning, as Liddament (2000) lucidly does. This is a very small sample of design research, and yet the breadth of disciplinary allegiances and methods on display is staggering. History, criticism, psychology, sociology, anthropology and philosophy are represented in this spectrum, as are documentary methods, critical analyses, experimental procedures, statistical analyses, interviews, ethnographic ‘thick’ description, interaction analyses, action research case studies and conceptual analyses. And this ignores the various general philosophical stances that may be implicit to some of the work above such as social constructivism, cognitivism, pragmatism, post-positivism, hermeneutic phenomenology and others. Welcome to the mire of design research.