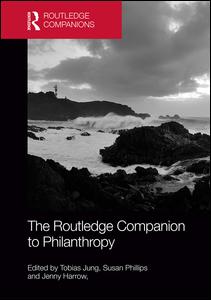 The Routledge Companion to Philanthropy

Accountability, both mandated and negotiated, is an evolving feature of philanthropic life. For foundations and other philanthropic actors, seeking to influence social change and needing to work with others, accountability and the legitimacy it brings, have become ‘operational necessities’ (Tomei, 2013: 403). Yet, philanthropy’s varied forms, levels, directions and networks means that the forms and expressions of its accountability are in flux. The power asymmetries derived through private, discretionary gift making ensures growing external interest in – though not necessarily leverage over – philanthropy’s accountability, both globally and locally. Such accruals of power, however, point to the greater importance of philanthropy’s ‘accountability by judgment’ than its ‘accountability by standards’ (Stewart, 1984: 17). In particular, when foundations and other philanthropic actors’ judgments lead them to seek ‘transformational social change’ (Partzsch and Fuchs, 2012), they become intertwined with governmental spheres, making them important policy actors, albeit not necessarily democratic ones (Jung and Harrow, 2013). This pushes them towards the more harsh accountability arenas, previously occupied only by public servants, including scrutiny of what organized philanthropy chooses not do, particularly in periods of prolonged austerity (Crowley, 2013). At the same time, increasing professionalism in the practice of philanthropy is producing higher expectations on the part of the public and within philanthropy itself.

What motivates people to gi...