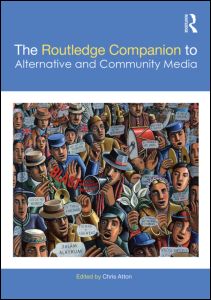 The Routledge Companion to Alternative and Community Media

A number of terms have been invoked in order to refer to those forms of media distancing themselves from mainstream media, including ‘community media’ (Howley, 2005), ‘grassroots media’, ‘autonomous media’ (Langlois and Dubois, 2005), ‘citizen journalism’ (Allan and Thorsen, 2009), ‘alternative media’ (Atton, 2002; Couldry and Curran, 2003; Bailey, Cammaerts and Carpentier, 2008), ‘tactical media’, ‘citizens’ media’ (Rodríguez, 2001), ‘small media’ (Sreberny and Mohammadi, 1994), ‘radical media’ (Downing, 2001), ‘underground media’, ‘pirate media’, ‘social movement media’ (Downing, 2008, 2011) and ‘civil society media’ (Carpentier, Lie and Servaes, 2003). While all these terms have different analytical implications, what they share is a commitment to media that serve the interests of citizens (and particularly those on the margins), and a belief in alternative funding structures of media institutions. For example, for Atton (2002: 4), alternative media “are crucially about offering the means for democratic communication to people who are normally excluded from media production”, whereas for Hamilton (2000: 373), the value of these media lies “in their exploration of new forms of organizing more participatory techniques of media and more inclusive, democratic forms of communication”.