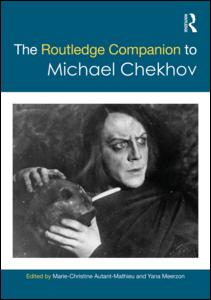 The Routledge Companion to Michael Chekhov

An old proverb says, “One’s own shirt fits closer to the body.” In Soviet times Chekhov’s teachings were forbidden, and efforts were made to erase them from Soviet theatre. Nevertheless, they found their way into my heart and mind, although I was a Soviet student, and determined the course of my personal life as much as my professional destiny. In 1970, at the age of 18, I entered the Faculty of Directing in the State Institute of Theatre Art in Moscow (known by its acronym GITIS). 1 There was a considerable contrast between the calm life in my tiny country, Lithuania, where a close connection could still be felt with nature, and the intense rhythm of life in the megalopolis of ideology. It knocked me off balance emotionally. Learning the dogmatized Stanislavsky System, which, according to Vsevolod Meyerhold, was ready to take over even the central post office of Moscow, depressed me and stifled my creative energy. I began to think that the theatre studies I had dreamed about since childhood were just not for me. Just then a typewritten manuscript of Michael Chekhov’s book On the Technique of Acting, which was much frayed from many readings, fell into my hands. Underground publications such as this were known in the USSR as samizdat and were used to circumvent the authorities and censors; they were very popular among intellectuals and students. The text had been typewritten in Russian in the USA and reproduced in the most primitive fashion, making it very difficult to decipher. I was able to borrow it for one night as was customary. Once I got it, I was awestruck. It became apparent that Socialist Realism, which was being thrust upon us and which was able only to create a gray reflection of a gray reality, was definitely unessential. What’s more, it was not the only manner of creativity available! I learned that imagination happens to be one of the fundamental elements of creativity. Imagination was something I’d been blamed for having too much of, so it was always being quenched in me. I rushed to jot down the main points and practice exercises from that book to the extent the circumstances allowed. These tempting and mysterious teachings restored my self-confidence and became the guiding light for my future studies and professional development. Most importantly, they clearly demonstrated that one’s inner life, one’s spiritual world, is no less real than the material one – it is a tangible reality. They encouraged me to dig deeper into the mysteries of existence as an antidote to the ruling communist doctrine of materialism. As I held the Higher Self in mind, as well as its creative expression, I would try to search for values suitable for me and to form professional skills that would be independent of official Soviet doctrines. Chekhov’s imperative of a free and creative spiritual life prompted me to become actively involved in Lithuania’s “singing revolution,” which liberated it from totalitarianism. Even now, while living in a consumer society, this imperative empowers a person, as we used to say, “not to pray to the specificity of the everyday.” These are the basic attitudes I try to convey, not only to my students; I also try to share them with others when I am delivering lectures or leading creative workshops aimed at different members of society.

The legacy of Michael Chekh...