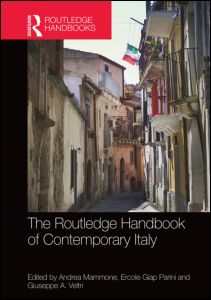 Notes on Italy in recent decades and the Handbook

The Routledge Handbook of Contemporary Italy

Traditionally, a foreign reader always finds a good number of books dedicated to Italy. A great emphasis is usually given to the artistic heritage of the nation, cuisine, travel guides, and its significant past, from ancient Rome to Mussolini and fascism. For social scientists, the usual attempts to analyze Italian society have instead regularly focused on Italy’s politics and institutions. In other fields, Italian culture, literature, and arts are continuously attracting the attention of scholars. In many ways, Italy matters, and this Handbook wants therefore to reinforce this belief, and it is grounded on the acceptance of the geopolitical, intellectual, social, and economic significance of the Italian peninsula for the Western world. For example, the experience of the “Berlusconi years,” the so-called Second Republic, and the advent of a new wave of political and social actors have been, and are going to be, at the center of attention. In truth, many recent works especially, though not exclusively, in Italy seem to be devoted to the “Italian case,” its somewhat bizarre democracy, and the various examples of corruption, bribes, and waste of public funding. They, at times, provide some generic (if not sensationalist) journalistic accounts of Italian society and politics (whilst the scholarly production tends to be narrower). This has inflated the market for more scientific overviews.

From the Democrazia Cristia...

From Manpower to Brain Drai...

Mafias, Italy and Beyond