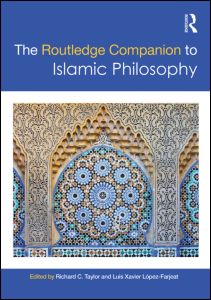 The Routledge Companion to Islamic Philosophy

When philosophy, and with it metaphysics, entered the world of Islam in the ninth century, it was certainly a current of thought that had its ultimate roots in Greece. Plato and Aristotle figured as its major founders and with late Hellenistic thinkers it was believed that there were essentially no major differences between their respective doctrines. However, partly by some challenges coming from the “new” religion, partly by further independent reflection, a new kind of philosophy, including metaphysics, was developed inside the classical Islamic world. Already in al-Kindī, the “father” of Arabic-Islamic philosophy, the development of a new metaphysics can be detected. He calls it al-falsafa al-ūlā, “First Philosophy,” as evident from the title of his major work on this subject, and clearly defines it as a theology: “The noblest part of philosophy and the highest in rank is the First Philosophy, i.e. knowledge of the First Truth Who is the cause of all truth” (al-Kindī 1974: 56). This might at first sight look like a fundamentally Neoplatonic concept of metaphysics. However, a closer inspection shows that he no longer understands the One’s causality in Neoplatonic terms of production by participation, but in rather monotheistic Islamic terms as the bringing into existence. At the same time, in a similar vein, he makes Aristotle’s Unmoved Mover an explicit cause of being, not just of motion. All in all, one detects in the way he conceives and elaborates his metaphysics, a combination of Aristotelian, Neoplatonic and Islamic elements (d’Ancona-Costa 1996: 11–16; Adamson 2005). As for al-Fārābī, the “Second Master” (Aristotle being the “First”), he, at least compared to al-Kindī, reshaped the project of metaphysics fundamentally. In spite of important modifications in expression in different works, it is beyond any reasonable doubt that he distinguishes three major parts in the science of metaphysics: an ontology, i.e. the study of “being qua being”; an archē-olology, i.e. the study of the foundations of the particular sciences; and a theology, i.e. the study of the divine as foundational of the universe (Martini Bonadeo 2005: 400–2). In this sense, metaphysics is for him “what (comes) after physics” (mā ba‘d aṭ-ṭabī‘a), whereas the “divine science” (al-‘ilm al-ilāhī) is only part of it (al-Fārābī 1890: 34–5). Even when he designates by this latter expression the entirety of the discipline of metaphysics, as for example in the fourth chapter of his Enumeration of the Sciences (Iḥṣā’ al-‘ulūm), he still continues to distinguish the three parts (al-Fārābī 1932: 50–2 [Arabic]). Hence, it is obvious that he wants to do more justice to the entirety of Aristotle’s Metaphysics than al-Kindī’s outspoken theological approach had done. Certainly, inside metaphysics, theology remains a crucial issue, since it deals with the ultimate grounding of our world. In al-Fārābī’s view this was also a major concern for Aristotle. However, the latter failed to explain the relation between the divine and the natural beings, and therefore al-Fārābī consciously introduced the Neoplatonic idea of emanation, albeit in a highly developed way that takes into account the planetary motions according to Ptolemy’s astronomy (Reisman 2005: 56–60; Black 1996:187–9; Druart 1987). As to the centrality of this metaphysics of the divine for al-Fārābī, it is sufficient to look at the contents of his major work On the Perfect State (Al-madīna al-fāḍila), which starts with discussing the “First Cause.” In sum, the divine is not absent in al-Fārābī’s metaphysics but it is no longer its exclusive subject. Moreover, one looks in vain for typical Islamic influences: al-Fārābī’s God is the God of the philosophers and his religion is “philosophy.”