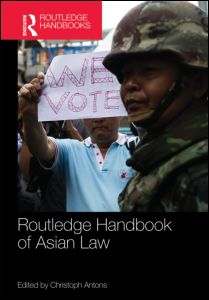 What is ‘Asian law’?

Asia in law, the humanities and social sciences

Although there are now many apparent success stories of economic development elsewhere, it was in Asia that countries first achieved the transition from developing to developed country status and broke into the ranks of what had been up to that point an exclusively ‘Western’ club. Japan, an early role model for the rest of Asia (Allen, 1981; Yamamura and Yasuba, 1987), was soon followed by a further group of countries, often lumped together as ‘the Asian tigers’. Precisely who the ‘Asian tigers’ are and from which regions of Asia they come has changed from time to time. In the late 1980s and early 1990s, there was talk of the ‘four Asian tigers with a dragon head’, referring to South Korea, Taiwan, Hong Kong and Singapore (Castells, 1992). This led some commentators at the time to infer a connection between Confucianism and economic development (for example Vogel, 1991; Redding, 1993, 1996), which appeared in total contrast to the view of Confucianism as an obstacle to modernity held by early twentieth-century thinkers such as Max Weber (Tu Wei-Ming, 1996) and by modernisation enthusiasts among Asian intellectuals during the same period (Wong, 1996). Soon, however, the ‘Asian tigers’ were joined by Southeast Asian countries with no Confucian cultures, to which economists referred as ‘second-tier newly industrialising economies’. 1 Indonesia, Thailand and Malaysia were included besides Japan, South Korea, Taiwan, Hong Kong and Singapore in the World Bank’s influential East Asian Miracle study of 1993 (World Bank, 1993). Interestingly, the study did not yet include the most recent examples of Asian economic success, the People’s Republic of China (PRC) and India (Peerenboom, 2007; Panagariya, 2008).

The regulation of innovatio...