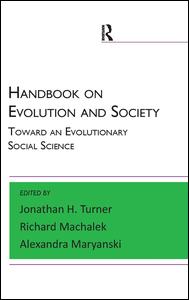 Handbook on Evolution and Society

At the turn of the last century, Darwinian approaches to human behavior were popular in social science. That human behavior had a biological foundation was widely accepted and not particularly controversial. But in the 1920s and 1930s a reaction against biological explanations set in, and a kind of social and cultural determinism arose; it remains dominant today in one guise or another. And yet in the 1970s and 1980s a number of social scientists, frustrated with the lack of progress in their field, began to reconsider human biology and turned once again to Darwinism to provide theoretical foundations for a science of society. The new Darwinism—known variously by the names sociobiology, evolutionary psychology, and human behavioral ecology—has led to enormous progress, but in and of itself leaves many social phenomena unexplained. In this chapter I bring other approaches—in particular, sociological conflict theory, rational choice theory, cultural materialism, and social evolutionism—into contact with the new Darwinism and create a synthesis that I call Darwinian conflict theory. Though called a theory for purposes of simplification, Darwinian conflict theory is in actuality a large-scale Lakatosian research program. A crude version of this program was developed some years ago, but the version offered here is much more fully worked out. It contains 51 axioms, 52 postulates, 19 theories, and 354 propositions. The theories and propositions apply to reproductive behavior, parental investment, economic subsistence and exchange, dietary choice, incest avoidance, human sexuality, mate choice, kinship and marriage, gender differentiation and inequality, status and resource competition, geopolitics, aggression and violence, ethnic attachment, and religious beliefs and rituals. I conclude the chapter by indicating the kinds of evidence that would falsify Darwinian conflict theory.

Marry In or Die Out