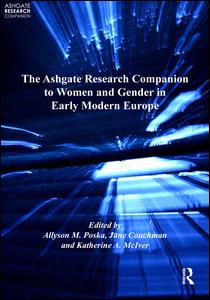 The years 1996–2009 saw an unprecedented wave of publication of early modern European women’s works, many of them available for the first time in print. Among this proliferation of editions of women’s works were not only solo-authored texts, but multi-volume series of texts by women authors across Europe. The availability of this polyglot body of women’s writings in English translation was key in building a new community of scholars and students of early modern women across language barriers. In 1996, Margaret King and Albert Rabil, Jr inaugurated the series The Other Voice in Early Modern Europe, featuring women’s writings for the period 1400–1700 in English translation from works originally published in French, Italian, Spanish, Dutch, German, Portuguese, Russian, Scandinavian and Ukrainian as well as in English. 1 1

In 2009, Mary Ellen Lamb directed the publication of a seven-volume series titled Ashgate Critical Studies in Women Writers in England, 1550–1700. 4 4

Women in Science and Medici...

Beyond Isabella and Beyond:...