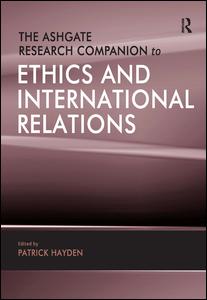 The Ashgate Research Companion to Ethics and International Relations

I would like to thank Dan Bulley for his insightful comments on a draft of this chapter.

Ethics is concerned not only with what counts as good ways of living, but with how to act in relation to others. If we are in tune with a particular ethical view of how to live and act, we can feel good about ourselves. Ethics is, in John D. Caputo’s words, ‘wholesome, constructive work’ (1993, 4). Hence it would be strange not to endorse ethics. One might find enacting ethics unrealistic, impossible in a particular situation or even in international politics generally. But it seems, on the surface, difficult to see how one could object to ethics as such. Objecting to ethics would, after all, seem to amount to being against doing the right thing. Caputo, however, who is inspired not least by the work of Jacques Derrida, has declared himself to be against ethics, loudly and unequivocally. Unfortunately, his provocative title – Against Ethics (1993) – incorrectly suggests that poststructuralists cannot or do not do ethics. This chapter will show that, quite to the contrary, it would be difficult to overstate the significance of ethical (or rather ethicopolitical) questions to poststructuralist research. Simply put, there just is no way around such questions. Given that, as David Campbell and Michael Dillon have observed, ‘Life is ethical without being grounded’ (1993, 166) it is simply impossible not to engage such questions, even though there is no straightforward ‘grounded’ answer to them. Consequently, there is a considerable body of poststructuralist work that not only examines the problem of ethics in the practice and scholarship of international politics but that also seeks to articulate an ethos or even an ethics.
Cite

The Ethics of Global Govern...