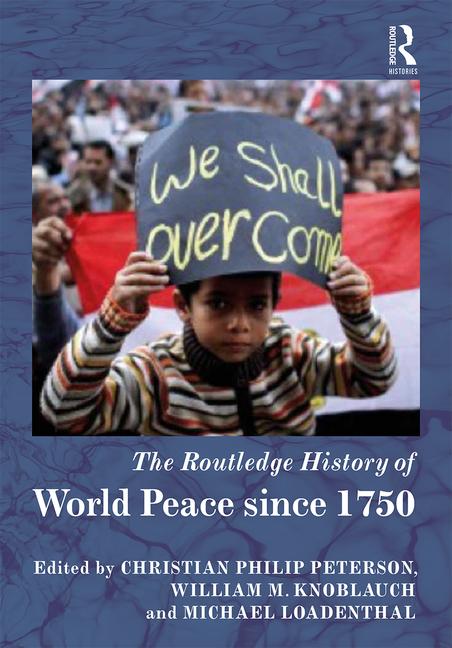 The Routledge History of World Peace Since 1750

Perhaps no other issue in this century is as important as creating and sustaining peace. Conceptionally, everyone wants more peace. However, ironically, bitter disagreements often engulf peace negotiations. Because such negotiations often involve the warring parties while ignoring the majority of the country’s residents affected by war, peace talks often ignore those most interested in holistic, positive peace. One solution with immense promise is the Women, Peace, and Security (WPS) Movement. When peace negotiations include women, countries are 20 percent more likely to enjoy peace for two years and 35 percent more likely to enjoy peace for fifteen years. 1 However, because scholars traditionally study the state and the most violent factions that cause war, fewer studies focus on the majority of residents—women, indigenous groups, and unarmed populations—who are not fighting. Most chapters in this volume provide detailed, local analyses or case studies of the peace process via historical, sociological, or peace studies methodologies. Many are also about men’s perspectives on peace because, traditionally, women were not considered actors in conflicts or peace processes and their efforts were deemed unworthy of academic scholarship. This chapter argues, instead, that the peace process—the way out of war—should reflect women and gender issues because the route into war or dialogue surrounding war may be entirely shaped by men or perceived masculinities. Moreover, although women should be included in peace negotiations, barriers discussed below have prevented their on-the-ground gains over the last few decades. As a result of their exclusion, women peacebuilders do not receive attention, funding, access to negotiations, or positions of influence, and fighting continues within and between countries. Collecting data on women peacebuilders would highlight women’s contributions to education, advocacy, and deradicalization, hopefully bringing more attention, funding, and opportunities to women pursuing peace. Of course, some women further violence and some men promote peace; but the pages that follow highlight some of the benefits of including women in peace processes. Women tend to raise topics that speak to the underlying problems often provoking wars and to long-term community development concerns that need attention (e.g., anti-personnel mines within Afghanistan, child recruitment in Sierra Leone, human rights, health, justice, and education). 2

What is Peace, how have Our...

The Antiwar Movement in Leb...

Black Power and the Anti-Vi...