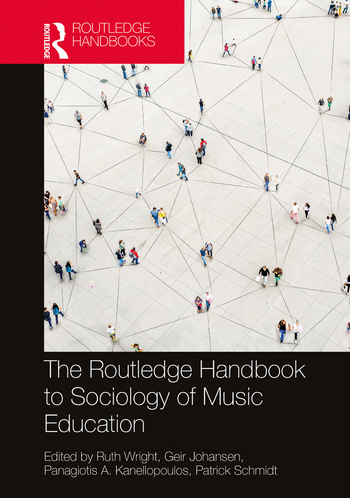 The Routledge Handbook to Sociology of Music Education

As a profession, music education creates and abides by cultural, which is to say musical, and social norms of acceptability that reflect those of the society in which it is enacted. As a discursive cultural field, music education necessarily accounts for the historicity of those subjects who are coded outside acceptability within it – those who have figured excruciatingly little in the profession’s canonical histories and historiographies, if a bit more in its canonical sociologies. Accounting for difference in sociological analysis, however, regardless of how it is framed, is inadequate because it obscures interactions of difference, in addition to the liberal ideology on which canonical sociology is based. Exemplified in the work of (white) canonical sociology theorists, theories, and/or schools, canonical sociology (associated in the US with the Chicago School founded in the 1920s) is embedded in the heteropatriarchy of liberal ideology which first normalizes and then universalizes the white heterosexual patriarchal family, rendering all other familial relationships ‘nonheteronormative’ regardless of how they are constituted. As such, they are signs of disorder, dysfunction, and degradation. By contrast, queer of color critique (Ferguson 2004) is a sociological approach that examines intersections and interactions of the social formations of race, class, gender, sexuality, and ability by deploying queer and poststructural theory, materialist analysis, and women of color feminism, particularly the work of African American lesbian feminists of the 1970s and 1980s. Audre Lorde is perhaps the best known of these activists, cultural workers, and theorists; my analysis of the deracialized, classist, sexist, and heterosexualised processes by which music education was founded in antebellum Boston proceeds through and with selections of her ‘biomythography’, speeches, essays, and poems.

Music and the social imagin...