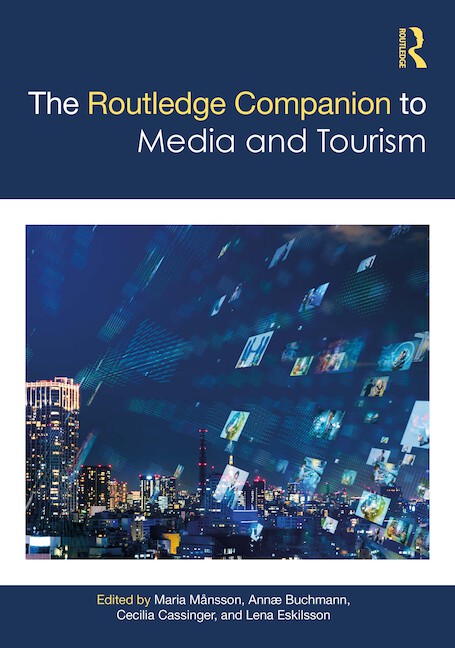 Interdisciplinary approaches to media and tourism

The Routledge Companion to Media and Tourism

The chapter propose an interdisciplinary framework for studying the relationships between places, media and tourism encompassing (a) media specific, (b) tourism specific, (c) geography specific and (d) policy specific approaches. The various disciplinary traditions and foundations influence the way that the relationship between media and tourism is approached, and whether the tourist, the tourism industry, the screen industry (film, television computer games) or new media technologies (such as GPS based locative media, social media, mobile media, augmented reality/AR, virtual reality/VR technologies or algorithm based production and distribution) primarily inform the main objective and focus of a particular study.

The fact that both tourism and media have become crucial parts of contemporary consumer culture has given rise to a range of academic studies of the relationship between media and tourism in disciplines such as culture studies, visual studies, tourism studies, media studies, business studies, urban planning, place branding, consumer culture studies, communication technology studies, geography, and anthropology. In particular, John Urry’s ground-breaking work on the tourist gaze has influenced and inspired research in the field since its first edition was published in 1990. A second edition came out in 2001, and a third edition (co-authored with Jonas Larsen) in 2011. Both tourism studies and media studies have undergone significant expansion and changes throughout the last couple of decades, partly because of various technological, transport, and market-driven developments.

In this chapter, I will map the interdisciplinary approaches to media and tourism as cultural phenomena and fields of research. My primary focus will be on media studies and tourism studies, although I am well aware that the field also attracts attention from other disciplines. In general, the relationship between media and tourism has drawn extensive attention in tourism studies, whereas so far, media and communication studies have only rarely addressed this relationship (Jansson & Falkheimer, 2006). Both tourism studies and media studies are interdisciplinary fields that combine theories, methods, and perspectives from the social sciences and humanities. However, generally speaking, tourism studies is more closely related to business, management, and marketing studies, whereas media studies, significantly, embeds its disciplinary approaches in the humanities and combines understandings of narratives, aesthetics, and genres with audience studies, media production, and media industry, based on social sciences methods. Communication studies, which, in most contexts, differs from media studies, is mainly informed by the social sciences and often includes journalism studies. These various disciplinary traditions and foundations will influence the way that the relationship between media and tourism is approached, and whether the tourist, the tourism industry, the screen industry (film, television computer games), or new media technologies (e.g. GPS-based locative media, social media, mobile media, augmented reality/AR, virtual reality/VR technologies, or algorithm-based production and distribution) primarily informs the main objective and focus of a particular study. This book, The Routledge Companion to Media and Tourism, illustrates this interdisciplinary approach, in which the contributors primarily base their work on one discipline or another, but at the same time reach out, bridge, and combine the various disciplinary terms, methods, and perspectives. This book bridges the gaps between the different disciplinary approaches and develops synergies between the fields. To ‘mind the gap’ between media and tourism studies, I hope that in the future, more media studies scholars will contribute to these fields and develop media-specific approaches to understanding the relationships between media and tourism, and how this strong connection influences new modes of media production; travel journalism; marketing; audience and user patterns; digital, online, and social media technologies; and locative media features that target tourists. Tourism has become a significant industry and culture, and thus in various ways drives media production, distribution, and media technology development.

Framework for mapping disciplinary approaches to media and tourism research

The relationship between media and tourism is characterised by its interdisciplinary approach, which draws on disciplines such as tourism studies, media studies, geography, and anthropology, in which the different disciplines typically emphasise one of the following agents and aspects.

Tourists: How tourists use media to prepare for their trips, navigate and photograph while they are travelling, and curate and share memories when they return home.

Tourism destinations: How media drive destinations to promote themselves, and to provide visitors with practical navigation and information tools, as well as to deliver operational management tools and strategic planning tools.

If we take my field of research – screen tourism – as an example, we clearly see that many scholars study screen tourists, their motivations for, and experiences of walking in the footsteps of their favourite characters and television drama series (e.g. Buchmann, Moore & Fisher, 2010; Connell, 2012; Kim, 2012; Lee, 2012; Leotta, 2011; Reijnders, 2011; Roesch, 2009; Sjöholm, 2010), and others focus on the screen tourism destinations, and how film and television influence tourism (e.g. Beeton, 2016; Månsson & Eskilsson, 2013). In contrast, if we take the screen industry as a point of departure and examine studies of how tourism influences journalism and screen productions, including their narratives and aesthetics, the academic contributions are more limited, and the tourism aspect is subordinated (e.g. Hanusch & Fürsich, 2014; Roberts, 2016; Turnbull & McCutcheon, 2017; Waade, 2016; Wheatley, 2016). In connection with this, the study of how tourism influences the development of new location-based technologies, including screen tourism apps and interactive maps, is a new and emerging field of study (Leotta, 2016; Lexhagen, Larson, & Lundberg, 2013; van Es & Reijnders, 2018). It is likely that we will see more of this kind of research related to media and tourism in the years to come.

In my previous work with Kim Toft Hansen, we proposed the location study model as a framework for empirical investigations of the relationship between places and television drama series, including screen tourism (Hansen & Waade, 2017). If we apply our off-screen location model to map the primary disciplines that are involved when we look at the relationships between places, media, and tourism, we may differentiate among (a) media-specific, (b) tourism- specific, (c) geography-specific, and (d) policy-specific approaches (Figure 3.1).

The media-specific approaches to studying media and tourism encompass studies informed by media theories (e.g. mediatisation, transmedia) or an understanding of how the various media (print media, film, television, internet, social media, mobile media, and locative media) have specific affordances, features, and conditions when it comes to production, content, and use (cf. the sections in this volume). This approach also includes media industry studies that focus on media policy, how media production and cross-sector collaboration are prompted by tourism (Ibrus, 2019), or the role that screen agencies, media clusters, media intermediaries, travel journalism, media platforms, and online services play when it comes to developing tourism. From a media-specific point of view, screen tourists are considered audiences, users, or fans, and screen tourism a mode of long tail marketing of certain media franchises including films and television series (Grey, 2010; Hills, 2002; Jenkins, 2006). Additionally, the field of smart tourism emphasises how the different technologies (location- based media, social media, mobile media) variously reinforce, influence, and change media and tourism practices (Femenia-Serra & Neuhofer, 2018).

If we turn to the tourism-specific approaches to studying media and tourism, the primary focus is on the tourists, how media influences their motivation and experiences and on developing and marketing the tourism destination. As already stated, DMO (Destination Marketing Organisations) studies and tourism studies more generally have significantly shed light on the relationship between media and tourism (Gyimóthy, 2015, 2018a; Lundberg, Lexhagen, & Mattsson, 2012; Reijnders, 2011). In this context, it is worth mentioning that tourism marketing is a well-established field of research in tourism studies, with its own academic journals, conferences, and networks. Since tourism as a cultural phenomenon and creative economy is related to many other disciplines, the tourism-specific approaches to studying media and tourism could also include elements from other disciplines, such as heritage studies (e.g. McAdam in this volume), musicology, food studies (e.g. Williams and Fusté-Forné in this volume), sports studies (e.g. Graakær in this volume), or folklore studies, to mention just a few. Furthermore, and as a distinct category, policy approaches to studying media and tourism are mainly informed by the political sciences, including business and administration studies, and consider the place not only as a site of media production or as a tourist destination but as a political and administrative organisation that encompasses various sectors and political obligations. The two previous categories may overlap, for example, media policy focuses on media production and regulation, and destination management addresses how to brand and develop a destination. Although tourism-specific approaches encompass strategies for, and studies of how to attract tourists, policy approaches have a broader scope concerning how a place (nation, region, city) can capitalise on media and tourism. For example, the tax incentive is a political strategy for attracting screen productions, and through this, to possibly develop screen tourism. Finally, the geography-specific approach is related to physical, geographical settings and landscapes, and how media and tourism represent, stage, and influence the actual places (Hansen & Waade, 2017; Joyce, 2019; Saunders, 2019). The relationship between media and tourism is a well-established research focus in geography studies (e.g. Edensor, 2002), in the same way as geography is one of the cornerstones of tourism studies. The geography-specific approach emphasises the character of the places themselves, their physical, historical, social, political, and cultural features, and how these features correspond to, contrast with, or combine ideas and imagery in mediatized tourism (Månsson, 2011; Saunders, 2019).

Even though media studies and tourism studies are distinct disciplines with different academic training,theories,methods, and mindsets embedded in different institutional faculties and departments,it is important to mention that media and tourism has emerged as an interdisciplinary field of research with its own institutional units and communities,for example,the international academic conference that focuses on the relationship between media and tourism,International Tourism and Media Conference (ITAM),which occurs every second year,and with which several of the contributors to this volume are affiliated. There also exists an informal research network that focuses on the relationship between popular media and tourism,and from which the Popculture Tourism Research Manifesto originates (Gyimóthy,Lundberg,Lindström,Lexhagen & Larson, 2015), whose network recently released The Routledge Handbook of Popular Culture and Tourism (Lundberg & Ziakas, 2018). However,both groups consist mainly of tourism scholars,and both groups focus mainly on single case studies that present tourism as influenced by popular music,films, and television series (e.g. vampire tourism,Bollywood tourism etc.). To my knowledge,at this stage, there are no similar networks and conferences based in media and communication studies contexts.

Research that addresses the relationship between media and tourism evolves and changes rapidly, following the development of media technologies, consumer culture, and tourism practices. Thus, it may be difficult to identify general knowledge gaps and future challenges. Still, it is worth giving them a thought. Therefore, this edited volume is a welcome contribution to the field. If the overarching ambition is to develop media and tourism as distinct and interdisciplinary fields of research, I think the following gaps and challenges need to be addressed in future works and initiatives:

In the years to come, the relationship between media and tourism will continue to emerge, and it will continue to be combined with other cultural markers such as food, music, festivals, sport, and celebrities, and thus challenge research and studies that encompass and contextualise both the production aspects (media and tourism industries) and consumer and tourism practices. I already look forward to seeing how new interdisciplinary collaborations and initiatives emerge in the research fields of media and tourism, and from this ground-breaking volume.

Representation of the UAE a...