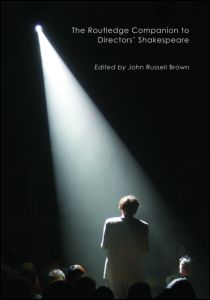 The Routledge Companion to Directors’ Shakespeare

Though the recipient of numerous theatre awards, a Guggenheim and a MacArthur ‘genius’ grant, Julie Taymor was not well known with general audiences until her extraordinary success as director of the musical theatre adaptation of The Lion King (1997), a production that introduced the American public to a number of avant-garde stage techniques and for which Taymor won two 1998 Tony awards: for best costume design and best direction. Welcome as popular recognition was for Taymor, it was rather belated, given that her distinguished career in American theatre extends back to the mid-1970s. Her productions include stage adaptations of novels and short stories (The Transposed Heads, from the novel by Thomas Mann, 1984; Juan Darién, from a story by Horacio Quiroga, 1988; Fool’s Fire, from the story ‘Hop Frog’ by Edgar Allan Poe, 1992; the opera Grendel, from the novel by John Gardner, 2005), operas (Stravinsky’s Oedipus Rex, 1992; Mozart’s The Magic Flute, 1993, Wagner’s The Flying Dutchman, 1995), original works (Way of Snow, 1974; Liberty’s Taken, 1985), plays by Carlo Gozzi (The King Stag, 1984; The Green Bird, 1996), films (Frida, 2002; Across the Universe, 2007) and three well-regarded stage productions of Shakespeare, one of which has been reworked for film. Taymor’s extensive oeuvre was honoured by an exhibit at the National Museum of Women in the Arts in Washington, DC, in 2000. The catalogue for that exhibition, Playing with Fire, offers the most comprehensive overview of Taymor’s work to date and is particularly valuable for Taymor’s own reflections and reminiscences about her many stage and film productions. Because Taymor’s career has been so varied, understanding her approaches to Shakespeare on stage and screen requires us to situate those productions in the context of a developing artistic sensibility marked by stylistic restlessness, daring eclecticism and an attraction to mythic storytelling.