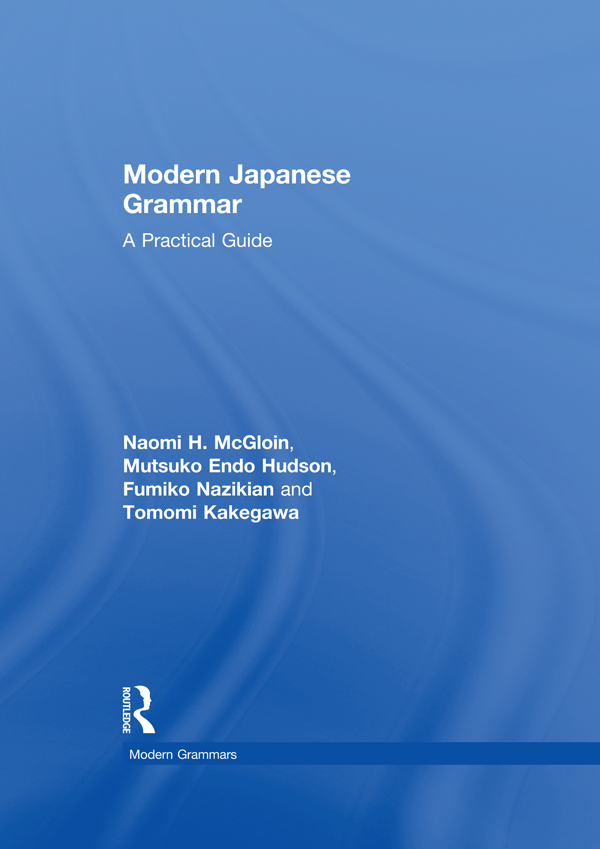 Four types of writing system are used in Japanese: hiragana, katakana, kanji and, to a lesser degree, roomaji. A very general description of each type follows the example sentence below.

Four types of writing system are used in Japanese: hiragana, katakana, kanji and, to a lesser degree, roomaji. A very general description of each type follows the example sentence below.

(My) wife works (Lit. is working) for the UN as a French interpreter.

The sound and the symbol do not match for the particles wa (topic), e (‘to’), and o (direct object). The symbols は (ha), へ (he), and を (originally wo) are used respectively. Palatal sounds are written with normal size i-row symbols of the hiragana chart, followed by small ゃ (ya), ゅ (yu), or ょ (yo).

Katakana are a set of 46 phonetic symbols, a vowel elongation symbol (ー), and a couple of diacritic devices for voiced and p sounds; e.g. ア (a), カ (ka), ガ (ga), ヌ (nu), ホ (ho), ボ (bo), ポ (po). They were created by taking a fragment of kanji (Chinese characters) with similar sounds; e.g. 阿→ア (a), 加→カ (ka), 奴→ヌ (nu), 保→ホ (ho). Some katakana symbols are based on the same kanji as those on which the corresponding hiragana symbols are based, but not all of them. Katakana symbols look angular, compared to the curvy hiragana.

Katakana is used mainly for loan words (especially those from countries other than China), to represent sounds (onomatopoeia), to express special nuances of words, including slang expressions, and to make a sound or word stand out from the rest.

Palatal sounds are written with normal size i-row symbols of the katakana chart, followed by small ャ (ya), ュ (yu), or ョ (yo).

To accommodate foreign sounds, some combinations of katakana have been devised that do not exist in hiragana.

Kanji are logographic (word-representing) characters borrowed from Chinese since the fifth or sixth century. They are used for nouns and substantive parts of verbs and adjectives; e.g. ‘wife,’ ‘language,’ ‘interpreter,’ ‘work’ (in ‘working’) in the first example in this section, ‘(My) wife works (Lit. is working) for the UN as a French (language) interpreter.’ To be literate in Japanese, one needs to know a little over 2,000 characters (called jooyoo kanji ‘Chinese characters for daily use’), which children learn during their nine years of compulsory education. Young children’s books are written in hiragana, and it is common for children to use hiragana to write words for which they do not yet know the kanji. Among adults, there are individual preferences even for the same words. Some people like to use kanji, while others do not.