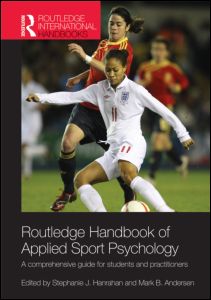 Without question, at the top level, concentration is a big part of a player’s game – whether they’re a keeper or outfield.

Sir Alex Ferguson, manager of Manchester United, 2009 Premier League champions, on a new record set by Edwin van der Sar for the longest time spent by a goalkeeper without conceding a goal; cited in Northcroft, 2009, p. 12 As top coaches, like Sir Alex Ferguson, have discovered from experience, the ability to concentrate, or focus on the task at hand while ignoring distractions (Moran, 2004), is central to successful performance in sport. This claim is supported by a combination of anecdotal, descriptive, and experimental evidence. First, anecdotally, many sports performers have emphasized the great importance that they attach to concentration skills. For example, Paul McGinley, the Irish golfer, reported what he focused on when he faced a tricky putt to win the 2002 Ryder Cup match for Europe against the USA:

At no time did I even consider the mechanics of the stroke … I became absorbed in the line of the putt. I could see it exactly from beginning to end. My only job at that moment in time was to set the ball off on the line that I had chosen. That was the only thing I could control.

(cited in Clarke, 2005, p. 63) McGinley’s insights are interesting because they highlight the importance of concentrating on a specific external target (the line of the putt) and because they indicate the practical value of dwelling only on actions that are under one’s control. Second, at the descriptive level, the capacity to become absorbed in the present moment is a key component of peak performance experiences in athletes (Jackson & Kimiecik, 2008). Finally, many laboratory experiments show that there is a relationship between focus of attention and skilled performance. More precisely, Wulf’s (2007) review of relevant evidence concluded that an external focus of attention (where performers direct their attention at the effects that their movements have on the environment) is usually more effective than an internal one (where performers focus on their own body movements) in the learning and performance of motor skills.
Cite