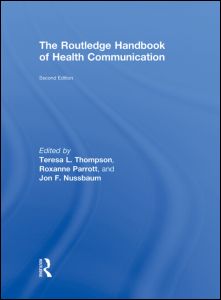 Towards a Transdisciplinary Perspective

The Routledge Handbook of Health Communication

As the other chapters in this volume readily reveal, health communication is the systematic study of message behavior, across a rich array of contexts, with the overarching goals of facilitating positive health outcomes, as well as reducing the prevalence and likelihood of a myriad of health threats. Since its institutional inception in 1972 via the “Therapeutic Communication” interest group in the International Communication Association (see Kreps, Bonaguro, & Query, 1998; Sharf, 1993), this area of study has achieved several milestones and evolved significantly (see Kreps et al., 1998; Ratzan, 1994; Rogers, 1994, 1996; Thompson, Robinson, Anderson, & Federowicz, 2008). Considered collectively, the overall magnitude of these achievements and growth led Ratzan (1994) to conclude that “effective communication between participants, advocates, and publics becomes the currency to achieve optimal health” (p. 202). Widespread recognition of the pivotal role of health communication in health promotion and health care has been institutionalized through centers of excellence, as well as through external funding from NIH, CDC, numerous foundations, and nongovernment organizations, thereby contributing “directly to the increased effectiveness of health promotion activities” (Rogers, 1994, p. 210; see also Kreps, 2003; Kreps & Bonaguro, 2009; Kreps, Vishwanath, & Harris, 2002; Rogers, 1997).These contributions are also evidenced by the identification of health communication in the Healthy People 2010 report, recognizing “communication as a critical core competency of public health practice” (Institute of Medicine, 2003, p. 6). This 2003 Institute of Medicine (IOM) Report, The Future of the Public’s Health in the 21st Century, and the Centers for Disease Control and Prevention’s (CDC) Office of Workforce Policy and Planning (2001) report, A Collection of Competency Sets of Public Health-Related Occupations and Professions, both identify health communication as a vital set of key competencies. Both of these influential documents include communication competency domains such as effective management and distribution of information, relating to the public, as well as other professional advocacy and health literacy skills.