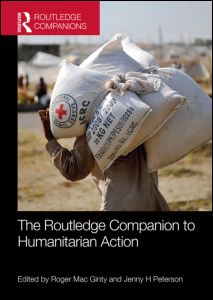 The Routledge Companion to Humanitarian Action

News media can play a significant role with respect to humanitarian responses to the human suffering arising from natural disasters, war and poverty. Policy responses, ranging from charitable donations, the allocation of routine and emergency aid, deployment of humanitarian organisations, right through to armed intervention during humanitarian crises, have all been understood, at some point or another, to be profoundly influenced by media reporting. Of course, scholarship on media and humanitarian action has also reflected the broader prejudices of Western humanitarianism, examining how ‘our’ media representations of ‘distant’ suffering people, normally from poorer areas of the world and black, come to influence ‘our’ (i.e. Westerners’) compassion and sympathy. Rarely has this literature paid sufficient attention to either local actors or local media within conflict and crisis zones. The title of Harrison and Palmer’s 1986 work, News out of Africa: Biafra to Band Aid, gives an indication of both the ethnocentricism and historical depth of the literature covering humanitarianism and the media. From the aid-agency-driven campaigns to raise money for those suffering during the 1960s Nigerian–Biafran War, through to the pop-culture-driven Band Aid experience of the 1980s, news media have often been intimately involved in the ways in which responses to crises evolve. Surveying the field of media and humanitarianism to then develop a clearer understanding of fruitful directions for future research are the two key tasks for this chapter, which is organised as follows. First, a brief history of humanitarianism and the media is provided by examining key debates that emerged regarding famine, media representation and political action prior to the 1990s. The chapter then critically reviews the CNN effect debate of the 1990s, which witnessed a rapid increase in debate and comment over the role of media in generating responses to crises. A key aim of this section is to provide both a substantial assessment, based upon existing research, of the scale of media impact on different types of crisis response, and also to identify the shortcomings of media-driven humanitarianism that have been discussed across the literature. The final section of the chapter explores contemporary debates over humanitarian action in the contemporary globalised, internet-based ‘new media environment’. The chapter concludes by setting out the major current issues demanding further academic analysis. In particular, the need for research to get to grips with local-level dynamics, including the role of local media within conflict and crisis zones, will be noted.