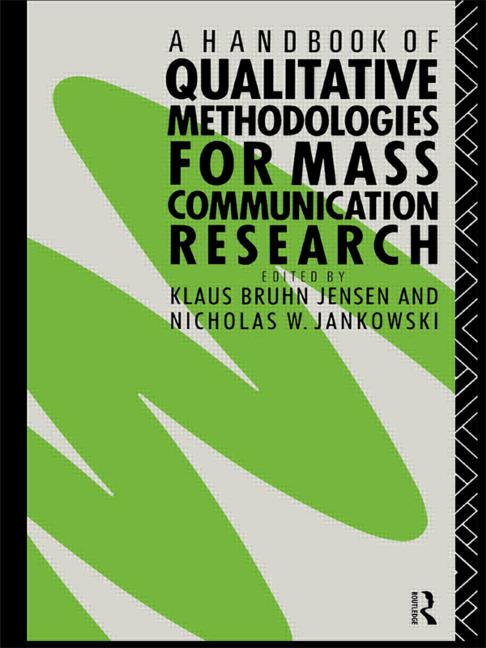 A Handbook of Qualitative Methodologies for Mass Communication Research

For more than 2,500 years, the humanities have been studying, in the contemporary terminology, the texts of interpersonal and mass communication. Traditionally, however, humanistic studies of literary works and other major cultural forms have not emphasized the analysis of culture as communicative practices. Studies, instead, have been said to perform an exegesis, or reading, of cultural tradition, poetic genius, the Zeitgeist, or an ideology which found its expression in texts. The changes in concepts and terminology are significant, because, as Raymond Williams has shown, the “keywords” of a culture at different historical times imply particular conceptions both of social reality and of the purpose of scholarship about this reality (Williams, 1983b). Whereas scholars differ on the precise origins of the humanities, it may be argued that a distinctively humanistic tradition, drawing on centuries of historical and textual scholarship, began to emerge in the early nineteenth century, and that, further, the humanities assumed their current shape when “social science” was spawned as a separate area of inquiry around the beginning of this century. If the origin of the concept of communication is associated with modernity and the rise of Lockean individualism (Peters, 1989), it is only within the last century that communication and information have become keywords across the humanities and social sciences. In the humanities in particular, the qualitative turn has been a communicative turn. This past century, then, may be thought of as the century of the sign, spanning the rise of mass communication on an unprecedented scale as well as, partly as a response to this (for want of a better term) megatrend (Naisbitt, 1982), the rise of semiotics and other communication theory to explicate an opaque social reality requiring interpretation.