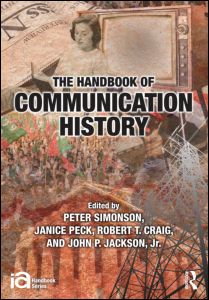 The Handbook of Communication History

If “science made the modern world,” a claim espoused at the end of the nineteenth century and repeated until accepted as a truism by the twenty-first century, what made science? A part of the answer to this question is communication (Shapin 2007). Included in a broad definition of communication is rhetoric, public relations, interpersonal and organizational communication, mass and mediated communication designed for multiple audiences, and technical communication designed for very few. All of the areas of communication study are relevant to science, too. However, they are inflected with the particular problems that science has—as a mode of inquiry, as a way of doing things, and even as a salubrious label. So, a consideration of how communication functions in science, in scientific institutions, among researchers, in publications and research reports, about science to those who don’t participate in it, and for science to persuade people to love it or resist it, helps to build a picture of how science has become such an enormous part of contemporary life. Indeed, much of how the world is categorized, “the West,” “BRIC” nations, “emerging economies,” “the information rich,” directly relates to the amount of science and technology these places have, and increasingly on how well they can communicate with one another about these developments or keep such developments secret for national advantage. Thus, the history of “science communication” is both the history of communication writ large and the story of changes in communication practices in science at the micro level.