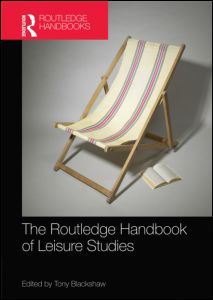 This chapter outlines the contribution of this important writer in the field of Leisure Studies. It focuses on his six major leisure textbooks Capitalism and Leisure Theory (1985), Ways of Escape (1993), Decentring Leisure (1995), Leisure and Culture (2000), Leisure Theory (2005a) and The Labour of Leisure (2010a). During the last two decades, he has been similarly prolific in cultural studies and has reflected upon diverse topics such as celebrity (2001a; 2012) and national identity (2007) in addition to writing books on Frank Sinatra (2004) and Stuart Hall (2002) and more recently on music (2011a; 2011b). This is no idle coincidence, as Chris Rojek is determined to bury leisure within the wider context of culture. His substantive contribution to Leisure Studies is twofold: it has been secured by a distinctive mapping of shifting debates in Leisure Studies and also by raising new questions in order to open up new lines of enquiry. I suggested a decade ago that Rojek should then be heralded as one of the founding fathers of postmodern perspectives on leisure, whatever that nomenclature may signify (Bramham, 2002), but, at the time, it was a mantle he was reluctant to bear. His later publications, as befits any leading contemporary social theorist, have changed emphasis and he subsequently has sought to establish an ‘action approach’ to leisure. However, one does not need to be Sherlock Holmes in order to detect his postmodern interests. For instance, to quote Tony Blackshaw: ‘Here was a dramatic irony: by the mid-1990s, postmodernism had lost its magnesium-flare fame, but at the very moment some in sociology were gleefully driving a stake through its heart, Rojek was using it to give the study of leisure a blood transfusion’ (Blackshaw, 2012: 2). It is worth mentioning that the title of Blackshaw’s recent interview with Rojek sits comfortably with these new, sharp times, as it casts Rojek as ‘The Man [italics added] from Leisure’, whereas critics would happily dismiss him as just ‘That Man from Leisure’ or, more cruelly, as ‘That Man from Leisure Studies’.

Ethnicity, Racism and the R...