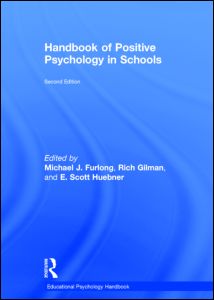 Toward a Science and Practice of Positive Psychology in Schools

Handbook of Positive Psychology in Schools

There is much agreement that positive youth development takes place in families, peer groups, and out-home contexts, such as schools (Gilman, Huebner, & Buckman, 2008). Nevertheless, investigations of factors that contribute to optimal school experiences in youth have traditionally lagged behind scholarship examining the other two contexts. Research has shown that from the earliest ages, the quality of school experiences plays a contributory role in key developmental and learning milestones such as motivation (van Grinsven & Tillema, 2006), identity development (e.g., Gonzalez, 2009), health outcomes (Forrest, Bevans, Riley, Crespo, & Louis, 2013), and overall academic success (Cohen, McCabe, Michelli, & Pickeral 2009). Further, the quality of experiences during the formative school years dictates, in part, the choices students make as adults. For example, longitudinal studies find that students who report more positive school experiences also report higher levels of mental and physical health as young adults (Reynolds & Ou, 2010; Wickrama & Vazsonyi, 2011), are less likely to engage in risk behaviors such as alcohol use (Locke & Newcomb, 2004), and report that they were better prepared for their future (Lapan, Gysbers, & Sun, 1997).