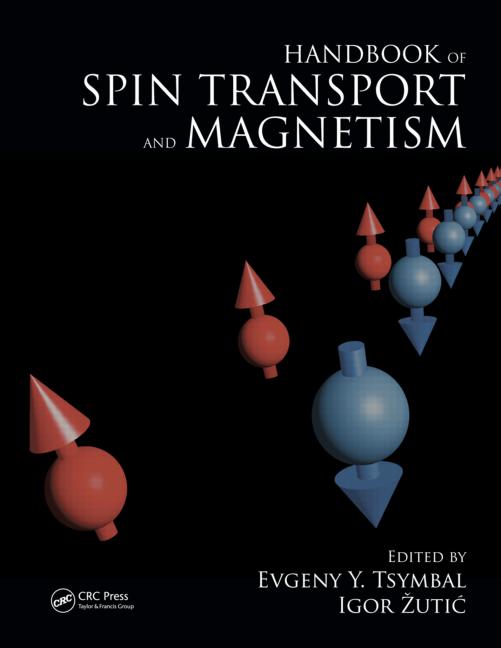 Handbook of Spin Transport and Magnetism

This chapter reviews some fundamental properties of tunneling transport of holes and transfer of angular momenta in the valence band of III–V heterojunctions involving the ferromagnetic semiconductor (Ga,Mn)As, one of the key materials for semiconductor spintronics [1,2]. Additional discussion of (Ga,Mn) As is provided in Chapter 18. This current research, which has roots in the work of Tanaka et al. in the early 2000s [3], is motivated by (1) the wealth of the physics involving transport of spin–orbit coupled states carrying quantized angular momenta in epitaxial heterostructures, (2) the need to use materials and tunnel devices providing an efficient spin injection [4–7] into semiconductors able to circumvent the conductivity mismatch problem [8], and (3) the possibility, as demonstrated in very recent pump-probe optical investigations [9,10], to use the high coherence of hole spin states in a semiconductor quantum dot as a quantum bit for quantum computing or spin-memory state [11]. Consequently, two prerequisites for spin manipulation—(1) creating a current of angular momenta in a semiconductor and (2) converting the latter information into an electrical signal by means of tunnel filtering—still remain challenging for today’s spintronics. Despite a relatively low Curie temperature currently reaching 185 K [12,13], the p-type ferromagnetic semiconductor (Ga,Mn)As, whose electronic structure is largely described in this volume [14] and already well documented [15–20], offers the possibility of a good integration with conventional III–V species and related structures. The (Ga,Mn)As ferromagnetism properties may be, in the metallic regime beyond the metal-insulating transition (MIT) [21,22], semiquantitatively understood by the p–d Zener approach [14,20,23]. It results in particular magnetic properties qualitatively different from conventional ferromagnetic transition metals. It appears then interesting to revisit spin-dependent transport properties and spin-transfer phenomena with (Ga,Mn)As. In addition, (Ga,Mn)As exhibits a specific anisotropic character of its different valence bands, an interplay of a large spin–orbit coupling, exchange interactions, and an anisotropic strain-field [24–27], which makes it very attractive. In that sense, III–V heterostructures including (Ga,Mn)As as a ferromagnetic reservoir represent model systems to study injection and transport phenomena involving angular momenta of holes as quantum numbers.