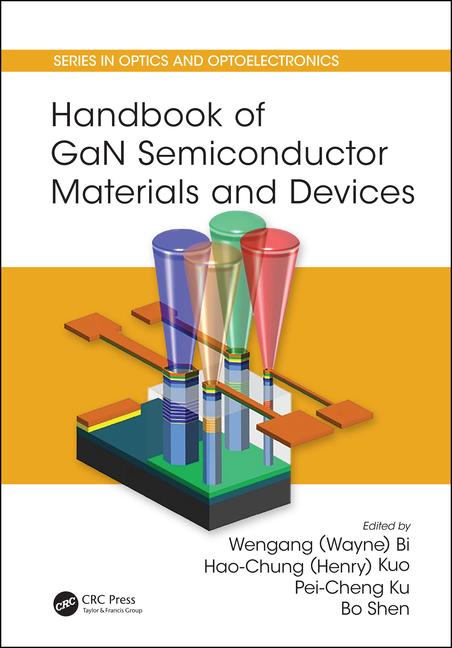 Since its first introduction, the nitride-based semiconductor has played an important role in the solid-state lighting application (Maruska and Stevenson 1974; Pankove and Hutchby 1976; Akasaki et al. 1989). Many great results have been published and highly efficient light-emitting diodes (LEDs) have been demonstrated (Hiroshi et al. 1990; Shuji et al. 1991; Nakamura et al. 1994). In addition to the light-emitting capability, the nitride-based materials, including aluminum nitride (AlN), gallium nitride (GaN), and indium nitride (InN), can also be very absorptive in different wavelength ranges. Combining with the wide range of band gaps (AlN: 6.2 eV, GaN: 3.39 eV, and InN: 0.77eV), the nitride-based materials can basically cover their photo-response from ultraviolet (UV) into infrared (IR). This wide coverage brings another possible usage for this series of materials: photodetection. Materials in the natural environment are seldom found with such properties. Many applications can be applied, such as photodetectors, solar cells, to name a few. The high internal quantum efficiency provides a good start for nitride-based devices. The chemical and temporal stable properties in this series of materials can be particularly useful when the environment is harsh to the devices, like by the sea or in the desert. From the early stage of the development of nitride materials, the photodetection is always an important option. Walker et al. (1999) demonstrated a GaN-based MSM photodetector with fast response (<10 ns). Liu et al. (2015) proposed and demonstrated an AlGaN/GaN MSM photodetector for UV range. Another very important design in photodetection is the photovoltaic related device. Nitride-based solar cells also draw much attention due to the possible transparent device which can be used in every window, and the wide range collection of the solar spectrum. In years, many groups have shown great progress in this field. As early as 2007, researchers from Georgia Tech provided the evidence of good photovoltaic response and as high as 60% of internal quantum efficiency can be expected from nitride materials (Jani et al. 2007). Attempts to extend the operating wavelength by increasing indium contents were found in Dahal et al. (2009) with 40% of indium incorporated inside the active region of the solar cell however, the resultant photovoltaic IV had very poor fill factor. Matioli et al. (2011) also enhance the external quantum efficiency (EQE) of nitride-based solar cell to 70% by roughening the surface to reduce the Fresnel reflection. Bhuiyan et al. (2012) published a great review on the InGaN-based solar cell performances in 2013. In general, nitride materials are stable under a harsh environment (such as high humidity, high/low temperature, high voltages, etc.) and this characteristic is very useful when the solar panel needs to be deployed outdoors. However, there are several limiting factors that could possibly restrain the future development of nitride-based photodetection devices. The biggest one is the operating wavelength issue. The operating range of the photodetection devices is determined by the active region, and usually, the indium content is the key factor. More indium incorporation is needed to extend the wavelength of operation. But it is difficult to put more than 40% of indium into gallium nitride and still maintain good device quality nowadays. Another one is the cost issue. To have low-cost photodetector or solar cell, the device needs to be capable of large area growth, which is lacking in the nitride-based materials when compared to a 12-inch wafer of silicon. High indium content or purely InN layer as the main active component in the photodetection of nitride-based devices is still a highly sought-after topic for the research. In this chapter, we will review the current progress of the nitride-based photodetection devices in our lab.